I recently wrapped up a pretty unique reputation management project with beyond expected success and I wanted to outline the strategy I used here. I’m hoping someone reading this can use this strategy to fight some negative search results, or maybe if you have your own strategy – let me know what I left out!

This client approached me with a problem more and more companies are facing. In August of 2008 Google released an autocomplete feature to their search engine. As potential customers search, Google’s algorithm predicts and displays search queries based on other users’ search activities. All of the suggested searches shown have previously been searched by other Google users, and typically at a relatively high volume to be shown as a ‘suggested search.’

Unfortunately, that means many businesses are seeing suggested searches with potentially damaging results. In the screenshot to the right, you can see a branded search for this clients name (blurred for confidentiality) along with the very damaging ‘scam’ suggestion. It easy to understand that if the second or third suggested search is ‘scam’, potential customers will click on it and we know that 67% of purchases are influenced by online reviews. 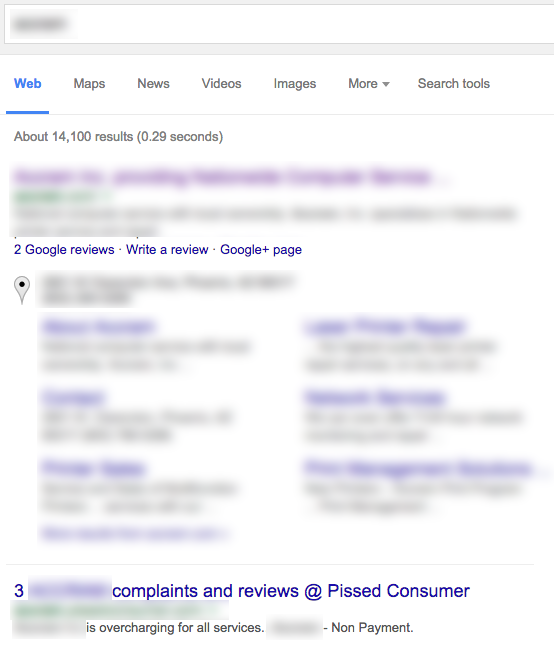 This was also effecting their search results page.
Of course my client felt like this was having a negative impact on their business, particularly when you consider that branded searches often come at a point in the sales process when a customer is ready to purchase. There’s no way to know how many possible customers were scared off by the ‘scam’ suggested search and second organic listing.
It’s important to note that my client runs a completely above the belt business and delivers a service that satisfies 99% of their customers. They happen to work in a volatile industry that involves terms and agreements that are often hard to understand. It’s really an industry problem and not specific to this business. None the less, by serving this industry online since 1999 more than a handful of angry customers have taken to posting negative reviews.
Because of these negative reviews and content, when a searcher did click the ‘brand name scam’ suggested search they were quickly met with about 12-15 pieces of negative content in most cases posted on personal blogs, forums and third party sites built with this kind of negative publicity in mind.

Before outlining a plan of attack it’s important to understand why this became a suggested search. Even with an active online storefront for 16 years serving a high volume of customers, I couldn’t imagine that that many people were specifically searching ‘brand name scam’.
One idea I have is that this companies brand name is extremely recognizable and easy to remember. Due to this, there are not a lot of branded searches outside of exactly their brand name. This means to become a ‘suggested search’ it will only take a handful of searches before it shows up. Once it begins showing up in suggested searches it piques the interest of all future searchers of the brand name which creates a snowball effect. More searches for ‘brand name scam’ (because it was suggested) means more people are interested in this phrase. The more people Google thinks are interested in this phrase, the higher it begins showing in search.
I’ve toyed in the past with influencing Google’s suggested search feature with minimal success. The idea is that if you can place more (positive) suggestions into Google’s list by creating traffic around these searches they will eventually push the negative suggestion off of the list.
Instead, the strategy I employed and ultimately had great success with was placing more positive content directly in the SERP that the client had complete control over. By building a network of controlled content on this negative phrase, we could outrank the truly negative content and push it off of the first page. There’s an older (probably out of date) report that suggests only 2% of searchers click on anything outside of the top five positions. Knowing this, the idea became that if people are going to click the ‘brand name scam’ search, they’ll have to dig deeper to find the negative content.

Upfront – and to a client uneducated on the practice – my strategy may seem a little ambitious. I started with the goal of owning 90% of the first two pages (roughly 14 positions) and claiming the top five positions within 60 days. To control 14 positions I’d need roughly 30 pieces of high quality indexable content. With 30 pieces of content I can determine what type of content Google is favoring and which pieces aren’t gaining traction.
To begin I decided to categorize my content into two buckets – existing content and new content.

The common factor in all new and existing content that we promoted is that we were in full control of either the entire site or at least the comments. All pieces of content were well diversified, from several domains, many featured client testimonials and reviews, addressed scam concerns, included guarantees and general business information.

Link Building to Climb The SERP

Once we had all of our new content built we needed to give it a little push to get it climbing the SERP. Some of our highly authoritative backlinks (Huffington Post, Forbes, etc.) only took one or two links from our site network to get them to page one, but our newly created content on fresh domains needed a lot more help. 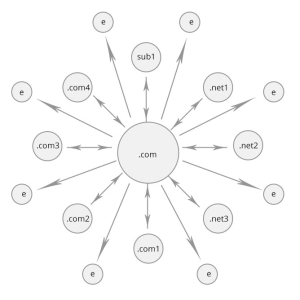 I began mapping our different resources and estimated the amount of “juice” each would need to rank for the ‘scam’ term. I avoided anything that might signal to Google that there may be some sort of link exchanging going on. You can see in the attached screenshot a basic version of how our interlinking began. Granted it became more robust and fleshed out as we created more content, it should still give you a general idea how the sites associated with each other.

And the winner is…

Was this a perfect plan? No, probably not. Of course all of those negative pages indexed in Google still exist. They always will. However we now own this search term to the point that not a single piece of negative content shows up until the very last position of page 1, and not again until page 3. The company now owns 19 out of 20 positions on this negative keyword term.
Essentially we took a search phrase filled with damaging content and now made it a major focus of this business by presenting them as the ‘good guys’ combating all of the scams commonly attributed to the industry. Searchers see the ‘brand name scam’ as an immediate red flag, but upon actually clicking the suggested search see a wave of positive results.
Overall I was very happy with the outcome of this strategy and excited about the reproducibility. Brand and reputation management is becoming increasingly important for businesses as the barriers are broken down between a single angry customer and a massive audience. Having a in-house strategy to combat this situation could be a difference making in closing your next sale.