I was listening to an interview between Tai Lopez and Gary Vaynerchuk titled, Audit Who You Are. In this interview Tai makes a brief mention of something called Eulerian Destiny. Tai describes it as a way to determine what you should be doing with your life using information you already have, or have experienced.

Now, let’s be clear here. The idea of methodizing the discovery of your so-called destiny is nothing new. Hucksters have been selling it in pill form, cards, palms and more for centuries.

But, what I truly love about Eulerian Destiny, whether you ultimately discover your destiny or not, is the amount of self-reflection and critical thinking it involves. If all else fails you will still walk away with a few pieces of new found insight and inspiration.

So, let’s talk a little bit about my own experience with Eulerian Destiny and how you can try it for yourself.

Where does Eulerian Destiny come from?

Eulerian Destiny gets it’s name from the graph theory, Eulerian path, discovered by Leonhard Euler. The Eulerian path is the trail in a graph which visits every edge exactly once. In terms of your destiny, this would be equivalent to using the path of least resistance to explore all edges of your life experience, strengths and skill set.

If you can align your experience, strengths and skills, you will have the shortest, easiest, most productive rise to the top of your chosen field.

The first step in this exercise is to draw four overlapping circles. We will fill in each of the four primary circles and lastly work on the overlapping areas. What did you grow up around?

It’s no secret that environment plays a major role in our long term development both personally and professionally. We’re shaped by the values of our family, the availability of tools and resources in education, the behaviors of our closest friends and much more that is often times out of our control. 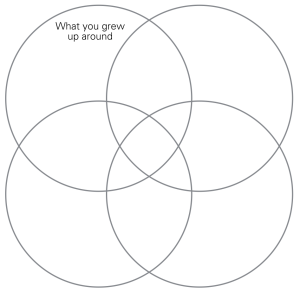 In your first circle I want you to list all of the things that you grew up around. This could be your parents work ethic and the jobs they held, learning tools that were available to you, hobbies and activities you were involved with, high school programs, the lifestyle of your friends and their parents, etc. Be sure to also include things unique to where you lived that could have helped or hindered your growth in certain areas.

Me for example, my dad had a strong blue collar work ethic and my mom was very entrepreneurial. I was given a computer and internet access at an age where most of my peers didn’t yet have access to one. I lived in a small town in Minnesota which was primarily blue collar workers with little emphasis placed on higher education.

What do strangers say about you?

In the second circle you’re going to start going a little deeper. I want you to list all of the things – positive and negative – strangers have said about you. 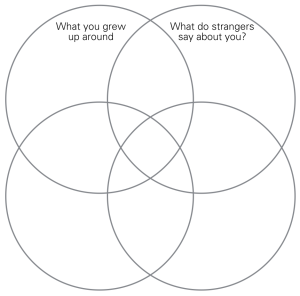 The reason you’re listing what strangers say about you is simple. In most cases you can’t trust your friends or family to give you honest feedback about your strengths and weaknesses. When there’s no incentive to maintain a relationship, honest feedback is easy to obtain.

This can be difficult because we don’t always communicate with strangers, so I usually frame it in this manner. Let’s instead say you go to a party, networking event, or maybe a discovery meeting with a potential client. After meeting you that one time, for that 30 minutes, what do they have to say about you?

For me, I believe they would say that I’m gifted at taking abstract marketing concepts and framing them in a digestible manner, I’m a very honest, I’m easy to talk to and I’m extremely competitive.

Though recent studies have popped up refuting it, I still believe deeply in Malcolm Gladwell’s 10,000 hour rule which states it takes 10,000 hours of complex and deliberate practice to become a master of any skill. No exceptions.

The idea of the prodigy is a myth. LeBron James wasn’t born with that jump shot. Drew Brees and his 5′ 10″ frame didn’t get lucky that he has a great arm and excellent touch. Prince wasn’t born playing those guitar solos. What you’re seeing is the end result of tens-of-thousands of hours of deep and deliberate practice.

The average professional working the average 40 hours per week will reach 10,000 hours in just under five years. The five years can of course be shortened drastically by working early mornings and late nights, but at the end of the day, you aren’t truly a master until you eclipse this 10,000 hour mark. 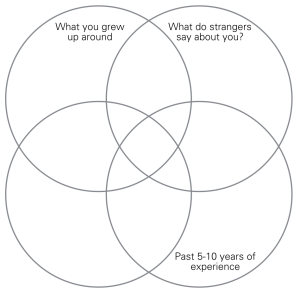 In your third circle you’re going to list what you’ve done over the past five to ten years.

Me for example, for five years I’ve done nothing but digital marketing. Every day, every night, every weekend, every holiday… you get the idea.

But if you go back ten years I have a wide set of experiences which still relate back to what I’m doing today. I’ve owned a restaurant, a clothing line, a recording studio, managed hotels, plus a lot of stuff I’m forgetting.

A core component of all of these roles was sales, relationship building and lead generation. All things I’m still leaning on today.

What can you talk about endlessly for hours? 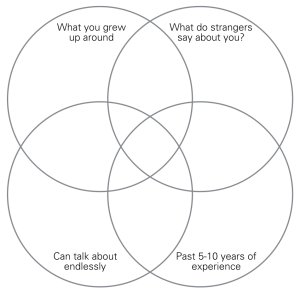 This one should be the easiest, but let’s set the stage. You’re at a party or networking event. What could you talk about endlessly and never run out of ideas or passion?

For me it’s simple. Business. How to grow a business, business ideas, operating a business, marketing a business, staffing a business – endlessly. I’ve been asked many times by co-workers and colleagues to, “turn it off.” I just can’t. I can’t see an ad, walk in a store or visit a restaurant without imagining ten different ways to do what they are doing. It’s just how I’m wired.

So, what is it for you? What do you lose sleep over? What do your friends know to ask you about? What topics can you talk about endlessly?

Where do these four circles overlap? 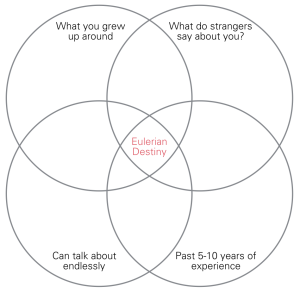 Okay, so you’ve spent a considerable amount of time thinking deeply about these four areas of your life. Now what?
Now, take a step back and look at each of these circles and look for the areas which overlap.

Again, my example would be that I grew up with a very hard working father and an entrepreneurial mother who gave me early access to a computer. These three things aligned giving me extraordinary amounts of hustle and the means to maximize that output.

Exercising these skills through intense and deliberate practice manifested in strangers recognizing my skill set, believing I could sell them anything, or I could sell anything on their behalf.

Because strangers believed in my ability to execute on what I was selling them, it led to me having a very strong career in digital marketing which I’ve been able to do for over five years and over 10,000 hours.

Because I saw early success in marketing, enjoyed it, and found ways to continue scaling that success I’ve become even more passionate about my work and this industry. I can talk about anything in business or marketing for hours on end, unprompted and unprepared.

At this point in my career Eulerian Destiny is reaffirming what I already know. Business and marketing is my destiny. Had I done this ten years ago, would I have reached the same conclusion? Quite possibly, but who knows?

That’s my destiny. What’s yours?