Google's Mobilegeddon 1-Month Later: The Storm That Never Was

Google’s Mobilegeddon 1-Month Later: The Storm That Never Was

We all heard the screams when Google announced a “significant impact” coming to their mobile search results. Suddenly, what savvy marketers and web designers have been preaching for years was finally being thrust upon businesses both large and small.
News of the looming update rippled outward from the small SEO community to even the largest of mainstream media outlets. Google has rarely – closer to never – pre-announced an algorithm update, so this was going to be huge!
Or not.
Mobilegeddon has come and gone with barely a blip on the radar. Many of the pages I’m currently managing are not only mobile unfriendly, but down right mobile ugly! Yet, looking at these sites before and after Mobilegeddon, It’s hard to discern any difference at all in mobile search traffic.

I reviewed the analytics of one site in particular that I knew if any site was going to be impacted by Mobilegeddon, it’s this one. 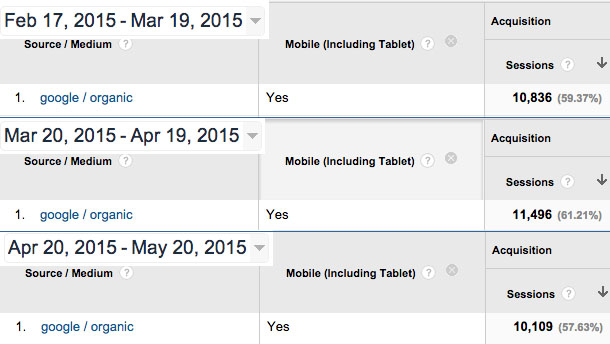 The above image shows you 2-months prior to Mobilegeddon, the month directly before, and one complete month after the April 21st algorithm update. Taking it at face value it’s easy to say page views for the month before the update were 11,496 and fell to 10,109 the month after. “That’s a 12% drop off in traffic!” says the web designer trying to sell you a responsive conversion. Looking closer you’ll see it’s only a 3.58% drop in comparison to overall site traffic, meaning traffic was down site wide and not just from mobile search.
Still, a 3.5% decline in search traffic is worth a deeper look. Is this due to the algorithm update, seasonal fluctuations in business, other marketing initiatives?

Another key metric to examine when trying to determine if Mobilegeddon had any impact on a site is to look at the average mobile search position. The image to the right (click to see the full version) shows that immediately on 4/21 the average mobile position fell from 6.1 to 10.3. Ahhhh! That’s page 2 territory and that’s where businesses go to die.
Over the next few days you see the average position coming back to normal and actually improving upon where we were before the update. You actually see both the desktop and mobile rankings fluctuating on a daily basis. This view is only a 14 day window, but you can see eventually the site begins to settle back to about where we were before this all started.
Let’s try to look at this from a more top-level view…. 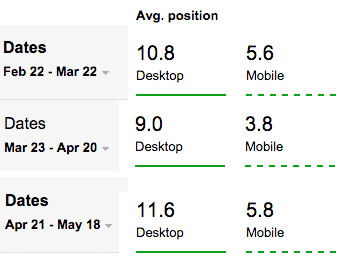 Now that we know the average mobile search position metric is erratic when viewed on a daily basis, let’s average these positions out over the course of three 28 day windows. The screenshot to the right includes two months before Mobilegeddon and a 28 day window after the algorithm update.
Again, what you’ll see if you compare 28 days before the update and 28 days after is a pretty significant impact. However, if you pull your data back a little bit further, even just one more month in this case, you’ll see that the month prior to the update just happened to be a great month for mobile search traffic and positioning. Two months prior to the update and one month after have almost identical metrics.

It’s only been 30 days so it might still be a little early to declare Mobilegeddon a bust. True, 3rd party applications are reporting very minor changes in positioning on pages two and three of the SERP, but they also show very little to no change in the top few positions on page one.
From what I’ve seen with my personal sites, sites I manage, and colleagues in the SEO space, Mobilegeddon has had little to no impact on overall search traffic. Certainly not the doomsday scenario it was made out to be! Could this just be another case of Google rolling things out over a long period of time? Or, maybe Google was just flexing their muscles to push the internet in a more user friendly direction.
Whatever the impact will be, there’s not going to be a business 6 months from now who’s upset or regrets optimizing their websites for mobile devices. At the end of the day it isn’t about optimizing to improve metrics, it’s about optimizing for actual human beings. Because it’s humans that invest in your business – not Google Analytics.